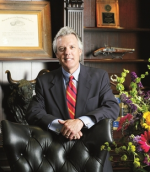 Lawyer bashing has become the trend in today’s society. Over the years, I have seen other attorneys running for public office that have been criticized because they have represented people charged with various unsavory types of offenses. Fortunately, that was not always the case and hopefully it will change in the future.

I was recently reading an article in the American Bar Journal that prompted me to do some investigating into the lives of other criminal defense lawyers and their foray into political life. Over two hundred and forty years ago five Bostonians were gunned down by British soldiers in what is commonly referred to as the Boston Massacre. In this era it was not uncommon for there to be clashes between soldiers, who had been in Boston since 1768 and civilians.

In this particular instance the dispute resulting in the massacre was the result of a disagreement concerning whether or not a British officer had paid a bill to a local Boston wig-maker. As a result of this dispute a mass of people began surrounding and confronting a British sentry. Out of concern for the sentry Captain Thomas Preston decided to take action. He took several men with muskets and bayonets to try to rescue the British sentry and return to the Main Guard house. The crowd became unruly and began moving toward the soldiers throwing items and hitting the men with clubs, sticks and actually knocking one of the soldiers to the ground. At some point, shots began being fired by the soldiers and when the gun shots stopped five civilians lay dying in the streets and another six were injured.

One week later, as a result Captain Preston and eight of his soldiers were arrested and indicted for the events now known as the “Boston Massacre.” In 1770, only thirty-four years old a young lawyer agreed to defend all nine individuals for the modest sum of eighteen guineas. By today’s standards such representation would represent a conflict of interest, however, back then Courts did not recognize such a conflict. The real conflict was the differing defenses. Captain Preston claimed not to have given the order to fire on the towns people, however, the eight soldiers all claimed to have fired following Captain Preston’s orders.

The trial of Captain Preston was severed from the eight soldiers and his trial occurred first in October of 1770. The young lawyers ultimately succeeded in creating doubt in the minds of the jurors as to whether or not Captain Preston ever gave the order to fire. After short deliberations the jury acquitted Preston on all charges.

Eight weeks later, with the same young lawyer the eight soldiers also faced trial. The defense presented the theory that the soldiers fired in self defense. Unique to this trial was that for the first time ever recorded, the case involved a “dying declaration.” The testimony came from a physician who was caring for one of the dying towns people. After testifying as to the patients apprehension of his impending death, the surgeon testified that the dying man (Patrick Carr) stated to the surgeon, “he forgave the man whoever he was that shot him, he was satisfied he had no malice, but fired to defend himself.” The trial judges instructed the jury concerning the dying declaration to the physician as follows; “This Carr was not upon oath, it is true, but you will determine whether a man just stepping into eternity is not to be believed, especially in favor of a set of men by whom he had lost his life.”

Thereafter, six of the eight soldiers were acquitted of all charges and two of the soldiers, the only two clearly to have been proven to have fired weapons were found guilty of manslaughter.
This lawyer, who faced criticism, the risk of his own, as well as the safety of his family realized and deeply believed that every person deserved a defense and he gladly took the case without hesitation. He also, later in life and career, became involved in service to the public and the Country, without the criticism of being a lawyer or the fact that he had actually represented and obtained acquittals for men accused of the “Boston Massacre.”

Reflecting back on his participation in the trial, the young lawyer is quoted as stating that, “it was, however, one of the most gallant, generous, and mainly disinterested actions of my whole life, and one of the best pieces of service I ever rendered my country. Judgment of death against those soldiers would have been as foul a stain upon this Country as the executions of the Quakers or Witches, anciently. As the evidence was, the Verdict was exactly right.”

This young criminal defense lawyer was none other than, John Adams, Second President of the United States of America.

We will respond to your inquiry in a timely fashion. Thank you.